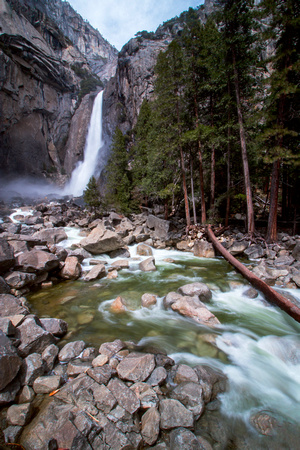 At just shy of 2,500 feet high, Yosemite Falls is one of the tallest waterfalls in the United States. This beast is almost entirely sustained by rain and snowmelt, so its flow varies dramatically throughout the year and can even dry up in the deep summer months. The lower falls is easily accessible for anyone, but the trail to the top is long and steep and oh-so worth it.

The Ahwahneechee, the Native People of Yosemite Valley, called this waterfall "Cholock" and believed the plunge pool at its base was inhabited by Poloti, or witch spirits. "An Ahwaneechee folktale describes a woman going to fetch a pail of water from the pool, and drawing it out full of snakes. Later that night, after the woman had trespassed into their territory, the spirits caused the woman's house to be sucked into the pool by a powerful wind, taking the woman and her newborn baby with it."
Canon EOS 80D, f/22 @ 10 mm, 0.4s, ISO 100, No Flash
© Lauren Maier
User Agreement
Cancel
Continue