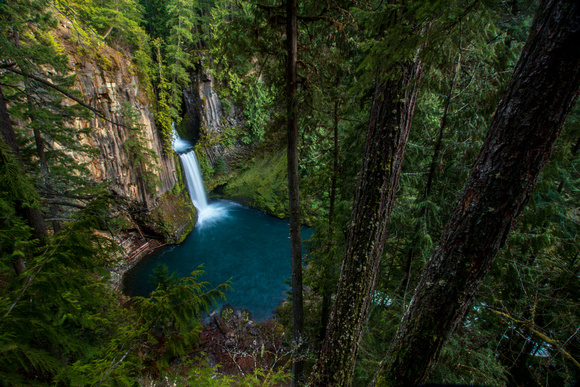 The hike to this magical falls, named "Toketee" (a name meaning "pretty") Falls is just under a mile and takes you through old-growth forests filled with Douglas-fir, western red cedar, big leaf maple, and Pacific Yew and follows the North Umpqua River. In the winter time, the trail is covered in thick snow that quickly turns into ice with all the foot traffic, though the Falls itself rarely gets blanketed with much more than a dusting.

Toketee Falls is one of the most famous in Oregon, renowned far and wide for the graceful columnar basalt formation framing the two-stepped falls. The two tiers of this waterfall equal out to a 113-foot drop into the pool below.
Canon EOS 80D, f/22 @ 10 mm, 2.5s, ISO 100, No Flash
© Lauren Maier
User Agreement
Cancel
Continue