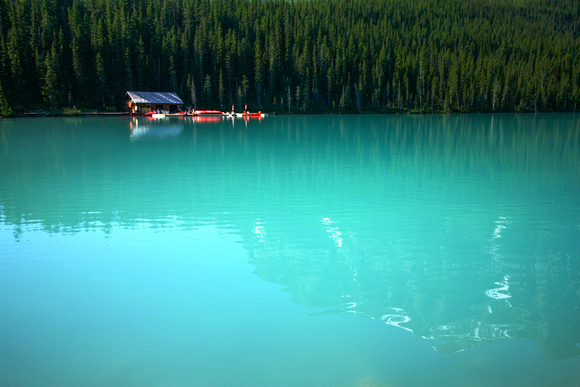 The Stoney Indians used to call it "Lake of the Little Fishes". Railroad surveyor Tom Wilson was the first white man to discover the lake in 1882 and named it Emerald Lake. Two years later the name was changed to Lake Louise in honor of Princess Louise Caroline Alberta, wife of the Governor General of Canada from 1878 to 1883, and the fourth daughter of Queen Victoria.

Undeniably the most photographed sight in Canadian Rockies, the lake is two kilometers long, less than half kilometer wide and 70 metres at its maximum depth. Lake Louise's unique turquoise color water is created by the glaciers at the head of the valley. The movement of glacial ice continually grinding away the bedrock creates rock flour (silt). This fine silt drains into the lake and much of the silt is suspended in the water. When the sun strikes the water, these particles absorb all the spectrum of colors except green and blue.

In keeping with the original name, the lake is home to little fish such as whitefish, splake, rainbow, cutthroat and bull trout. Mount Victoria, one of the most frequently climbed mountains in the Rockies, rises up over 3464 m from the north shore of lake.
Canon EOS 60D, f/5.6 @ 18 mm, 1/400, ISO 100, No Flash
©Lauren Maier Photography | All Rights Reserved
User Agreement
Cancel
Continue