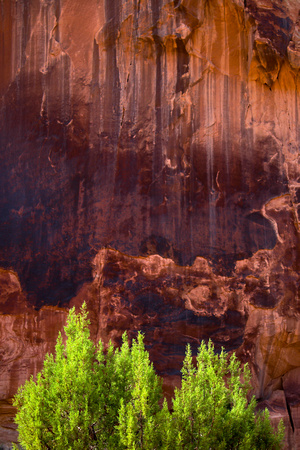 I'm not a fan of heat. I adore mountains, and trees, and snow, and lakes, and just general greenery; but I've fallen for the desert. I had no idea before stepping into Utah for the first time that it'd be love at first sight, in fact, the first time I went it was only because it was November and I forced myself to. Since then I've been itching to go back and explore all the nooks and crannies.

Capitol Reef National Park is one of the Big Five in Utah and the least visited of the lot but it's certainly not from lack of beauty. These sandstone walls tell a tale of time and their size dwarfs any viewers in the very best way.

"The most scenic portion of the Waterpocket Fold, found near the Fremont River, is known as Capitol Reef: capitol for the white domes of Navajo Sandstone that resemble capitol building domes, and reeffor the rocky cliffs which are a barrier to travel, like a coral reef.

The Waterpocket Fold defines Capitol Reef National Park. A nearly 100-mile long warp in the Earth's crust, the Waterpocket Fold is a classic monocline, a "step-up" in the rock layers. It formed between 50 and 70 million years ago when a major mountain building event in western North America, the Laramide Orogeny, reactivated an ancient buried fault in this region. When the fault moved upwards, the overlying rock layers were draped above the fault and formed a monocline. The rock layers on the west side of the fold have been lifted more than 7,000 feet (2,134 m) higher than the layers on the east.

More recent uplift of the entire Colorado Plateau and the resulting erosion has exposed this fold at the surface within the last 15 to 20 million years. The name "Waterpocket Fold" reflects this ongoing erosion of the rock layers. "Waterpockets" are small depressions that form in many of the sandstone layers as they are eroded by water, and are common throughout the fold at Capitol Reef. Erosion of the tilted rock layers continues today forming colorful cliffs, massive domes, soaring spires, stark monoliths, twisting canyons, and graceful arches."
Canon EOS 80D, f/5.6 @ 49 mm, 1/100, ISO 100, No Flash
©Lauren Maier Photography | All Rights Reserved
User Agreement
Cancel
Continue