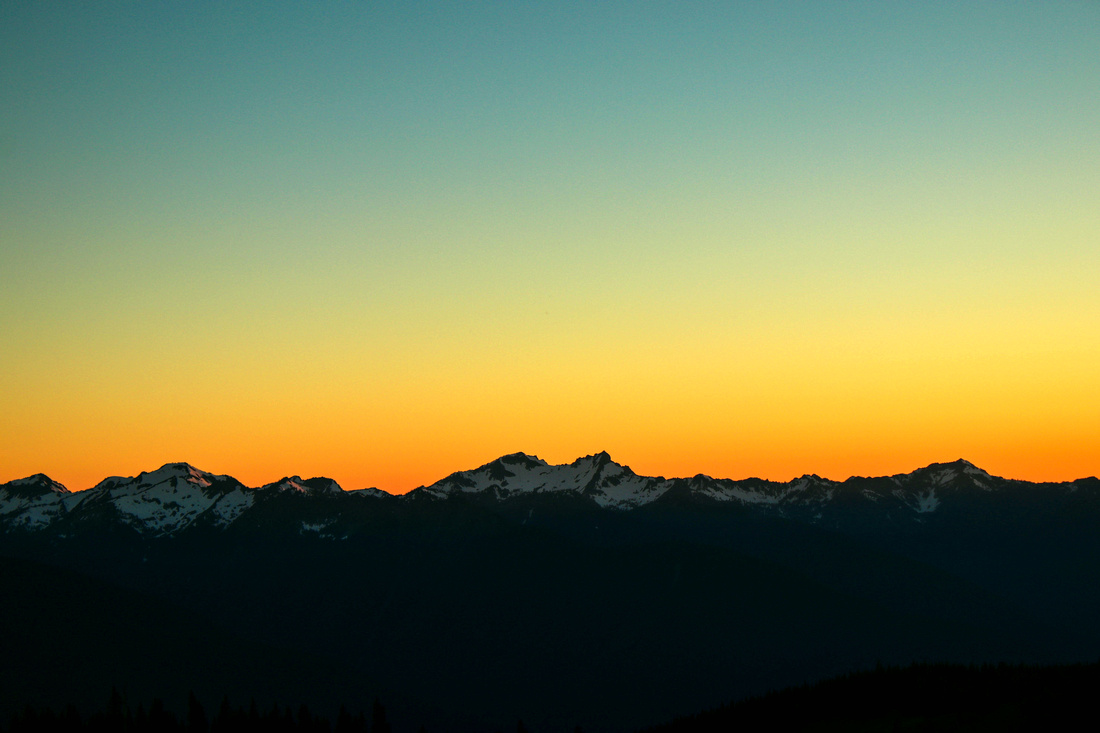 The rugged interior of Olympic National Park was born from the landscape's rapid formation and is almost impossible to explore in depth by foot. The views from Hurricane Hill offer a glimpse into the craggy mountains and that is more than enough for me! (Particularly at sunset!)

“I go back and forth between wanting the universe and wanting nothing more than a small corner of an empty room.” ~Unknown

This quote sticks with me, just like any relatable quote sticks with a person and makes them feel understood. I know for a fact that I'm not the only one who identifies with this sentiment, but I've only recently come to realize why it is that I connect with this quote in particular.

I grew up in a smallish town in southeastern Wisconsin, about an hour west of Milwaukee. My childhood consisted of long summer days living a semi-aquatic life in the many lakes that litter the state and lengthy, crisp winters building snowmen and sledding. I spent the shoulder seasons both wishing for winter to hurry up and come already and then condemning it for overstaying its welcome. This is how I spent the first 18 years of my life; in the same state, the same house, the same room. Like any true Wisconsinite, I'd vacations 'up north' many times, mixing in a few obligatory trips to Florida, and later, many visits to the Upper Peninsula of Michigan (affectionately known as the UP) to visit my older brother in college. By graduation day of high school, I'd only been to a handful of states and had never left the country, but the desire to see more was almost painful.

The first time I remember feeling that urge to go was when I was five years old. It started after returning from a family trip to Kauai, Hawaii. The tropical island was practically a foreign planet to my five-year-old mind. It was so different from what I was used to that I latched onto it and convinced myself that I belonged there (despite my ever-growing dislike for the heat and humidity). I decorated my room in tropical decor, complete with a 5-foot tall blow-up palm tree and real sand and seashells on top of my dresser. The phase passed eventually, but the feeling of restlessness only grew.

This urge, most popularly know as wanderlust, was satisfied briefly by a graduation road trip to South Carolina the summer before my freshmen year of college, but it quickly came back with a vengeance. I wanted to go international, thinking that would finally satisfy the hunger. And so I began my plans for Iceland.

After a full year of planning, it became a reality. For just shy of a month, I solo-backpacked around the western and southern rims of the country. It checked off a lot of firsts. First solo-flight, first time in a foreign country, first time backpacking, first solo-trip. And I loved it. I loved the feeling of being lost, I loved the freedom of walking down the road and seeing nothing but mountains, I loved hearing a language I couldn't hope to understand, I loved shivering alone in my sleeping bag while the wind and hail bombarded my flimsy tent, I loved making unfamiliar sights familiar.

The trip was a success in every way possible.

But as much as I'd like to say I have this insatiable and romantic urge to travel; to go, go, go, and never stop (because that has always been treated like the purest form of travel), I don't. I love to go to new places and see new thing, but I'm also perfectly content to spend a year or two in one place. I love being able to come home after of a weekend of exploring and cook my own dinner, use my own shower, and sleep in my own bed. I like walking familiar streets and knowing which coffee shop is the best one because I've tried them all.

It was on one of those newly-familiar streets, walking home at night with only the stars to light the way that I realized what I, as an individual, desire from travel. It came to me because for the first 18-years of my life there was only one tiny corner of the world that held familiar streets, now, at 21, I can navigate hundreds of miles throughout the world without a map.

Colorado became my playground after just a few months of living there. I know which grocery chain sells the best produce, which wilderness area has the best hiking and the fewest people, which road to take if the mountain pass is snowed in. A year in Oregon and I can mentally plot a weekend adventure without ever looking at a map. Even the roads that span the middle of the country hold familiar landmarks and quirks. Even Utah, Montana, Washington, and California are becoming more and more like home-ground.

And it's this that I value. It's the ability to go somewhere new and exciting and unfamiliar and make it a home. It's the ability to make anywhere I go as comfortable as my hometown. Because comfort is what every human being instinctively seeks and it's what travelers have to get used to not having. I've decided to pursue both.

I'll never be satisfied with short visits. If it were possible, I'd want to live everywhere I visit for a full month, full year, a full decade, so that I could experience it in its full capacity. I crave immersion in the local culture which means that I'll never be satisfied by being a simple visitor. My personal brand of travel is a slow-motion wanderlust.

For a long while, I was a bit intimidated by the more ‘extreme’ adventurers I’d come across. Those who thrived on adrenaline and weren’t happy unless they moving and doing 24/7 and risking their lives along the way. It was these people that formed my initial definition of adventure and I tried in vain to match it. Coming to the revelation that adventure is a personal thing that shouldn't be whittled down to an act of comparison doesn't really change anything in the end. I'll continue to travel the way that makes me most happy, but now I can do it with a newfound confidence and pride.