Watching the Birth of a Galaxy 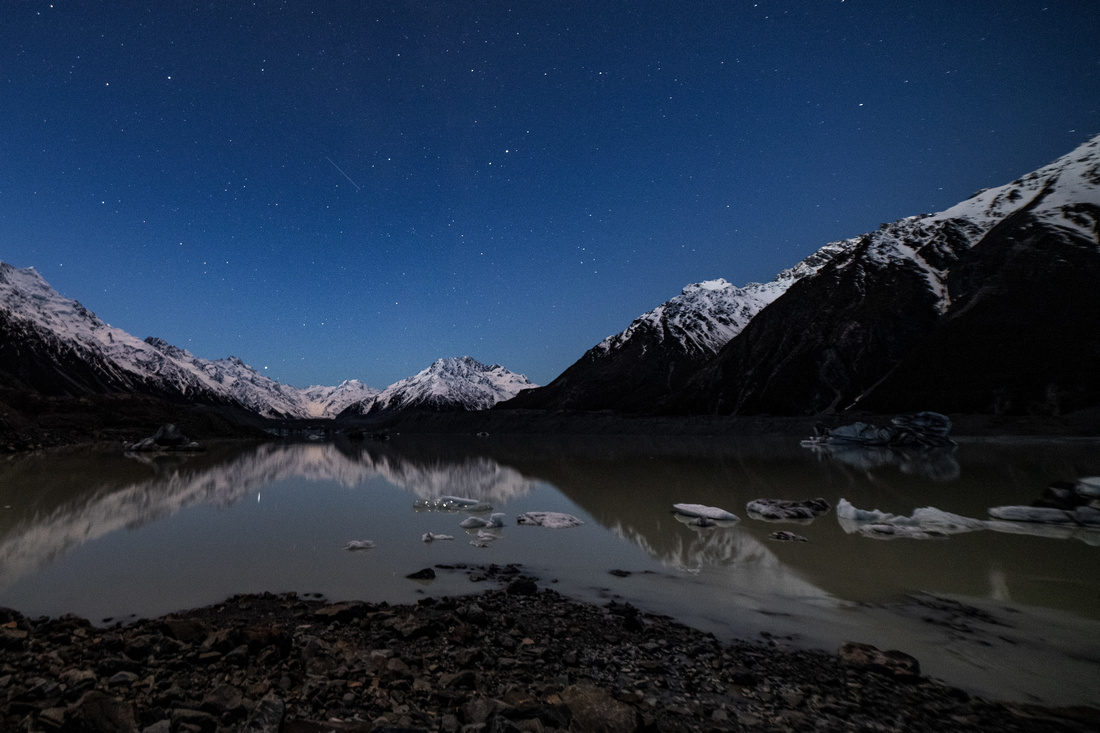 I often think of the night I watched a galaxy being born. The air was gentle, surprisingly so for a mid-September evening among mountain peaks and glaciers and icebergs. The lack of wind gave me the resolve to stay on the rocks to wait for nightfall; mind already framing out the best places for a good astral shot above the expansive glacial lake.

The stars always look extra beautiful in the mountains, after all.

Or maybe not always...

The stars, it turned out, would be a bust. The moon was full and though it lit snowy peaks as well as the sun, it drowned out the rest of the universe until just a few particularly bright novas were visible. Still, as far as disappointing photogenic conditions go, it was a pretty beautiful failure. I stayed for just a little longer, not through any hope of getting a winning shot, but because bathing in the solitude and silence of mountain peaks and glaciers and icebergs is the purest form of meditation for me.

Through the light of the moon, I watched the icebergs dance their slow dance near the outlet, restless in the way only glaciers and their offspring are in comparison to the rest of the earth. Between one moment and the next, I noticed it. Inside one of the ancient chunks of ice, a galaxy was being born.

I blinked, expecting the image to vanish, but it stayed.

It was still there; an iceberg twinkling like the Milky Way.

I stood and rock-hopped my way closer to the shore, still not quite believing my eyes, but nothing changed as I approached. The galaxy-containing iceberg continued to sparkle while its neighbors floated comparatively lifeless nearby. Not the biggest or the smallest, but the one in just the right place to catch the light of the rising moon, it was alive with happenstance.

I took a picture, because that's usually my first instinct, just to see if it would show up on the screen, a reasonably more trustworthy device than my own eyes. And there it was, zoomed in and grainy as hell, the proof of what I was seeing.

At first, I was desperate to get a good photo. It was the most amazing thing I'd ever seen and I needed to preserve it forever. Unfortunately, a good photo of a moving object at night, even a night as bright as that one, is not something my camera or I were capable of. I gave up after a few and chose instead to just watch.

Just like watching the real night sky, it was difficult to look at any one point of light. You had to look at the whole to really see it.

I stayed for two more hours, just watching, and it never lost its galaxy. Even as the iceberg floated aimlessly in the milky water and the moon continued on its predestined path, certainly no longer aligned in the way that had sparked the creation, it continued to twinkle. It's as if the moon had gifted it the light to last through the night.

It's hard not to believe in magic when you witness the birth of an ice-bound galaxy.

So I believe that there is magic all around us if only you look with eyes willing to see it.